madonna is friends with linbaba?

this AP bit about madonna’s trip to India this week mentions Shantaram with Johnny Depp in the present tense:

Madonna didn’t speak to journalists, and a New York-based spokeswoman for the 49-year-old singer wasn’t immediately available for comment.

Millions of people live in makeshift huts in slums along railway lines and roads in Mumbai, India’s financial and entertainment center.

She was accompanied by her husband, Guy Ritchie, and Australian author Gregory David Roberts, who made the Mumbai slum his home in the early 1980s.

Roberts worked for the city’s crime bosses and set up a free health clinic in the slum when he took refuge in Mumbai after escaping from an Australian high-security prison.

The slum features prominently in Roberts’ best-seller “Shantaram,” which is being adapted into a film starring Johnny Depp and directed by Mira Nair.

from the LA times

I’ve never found a better selection of old, perfectly broken in, vintage t-shirts than those by Skippy Haha! 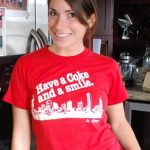