i got to the bottom of the swallowed bone mystery.

a couple weeks ago i was pulling out of my driveway when an old man who lives at the end of the street walked by.

he asked me if i liked poke sallit. i said i never had it. he said his old lady keeps asking him about the poke patch in my yard, and if i planned to eat any of it. i said no thanks, i had no idea, he’s free to pick whatever he wants out of it.

i saw him last night & he told me as a thank you he’s been leaving bones for my dogs.

i showed him the 20 staples on holden’s stomach & he started to cry.

he said he left some chicken wings and a pig’s neck yesterday morning. they were gone from where he left them and nacho must’ve eaten them when i let him out.

nacho threw up last night at 2 am. and again at 5 am. i haven’t slept since 2, i’ve been staring at him waiting for him to throw up or his stomach to bloat up.

i called the vet the minute they opened and told the story & said i’d like to get him xrayed to see if there are bones stuck in him and got an appt. for 1pm

since then he’s seemed fine, i fed him a little at 8 & just walked him around the block & hasn’t thrown up again and he seems ok.

it is probably crazy of me to take him for xrays. but jesus christ.

googling tells me poke salad is a southern delicacy similar to collard greens, but is actually toxic to humans and should not be made or eaten.

*****UPDATE*****
nacho is gonna be fine, the x-rays showed the bones are passing through his system, he has gastroenteritis & he’s on prilosec and semi-liquid diet for a couple days. 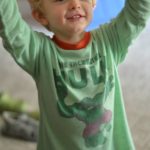