i just got back from the barack obama rally held in the packed and sunny football stadium of Asheville High School.

i was in a snaking line for about an hour. everybody was in good spirits. people were selling t-shirts, pins, hats, rally towels (i got one $5), stickers, car magnets, berets, for obama. a woman in line with me has lived in fairbanks alaska for the last 10 years and said it is ‘absolutely true, common knowledge’ among alaskans that governor palin’s oldest son, track, is in iraq as an alternative to jailtime, after vandalizing all the wasilla school buses with friends and other punk activities. so when she talks about him being there because he wanted to do all he can for this country, she’s lying.

also that wasilla had to hire somebody to do the budget for her for $30K/year because sarah palin was incapable.

she had some more nuggets but you had to be there.

both sides of the stadium’s bleachers were jammed full. along the fences within earshot were 3 deep at least. 50 yards of the playing field were full of old people, young people, black people, white people, babies on shoulders, and so many cameras.

barack obama looks so healthy and energetic and vibrant.

he talked about mccain wanting to ‘turn the page’ away from the economic crisis with swift boat distractions, and how we are not going to be ‘bamboozled’ and ‘hoodwinked’, ‘okeydoke?’ clearly mocking sarah palin’s country bumpkin act.

as far as taxes go, unless you’re really rich and making more than $250K a year, you’re way better off with obama.

at the end of his speech, they let go about two dozen white doves and they flew in formation, no undue chaos or fear just grace and peace.

and he was off

My Bruce Springsteen t-shirt fits perfectly! I love it! And shipping was so quick to the UK! 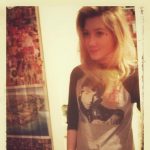