it’s a sad day over here.


the vintage vantage death announcement was published this morning, announcing an everything must go liquidation sale, all shirts are half price or less. the 40% off coupon code ‘skippyhaha’ still works, on top of the discount.


it has been a wild ride full of chaos and chuckles.


in 2002 i was about to graduate law school in chapel hill and selling vintage myself on ebay for some money, and emailed vintagevantage fanmail because I thought they were doing a great job.


one email led to another and i met up with john a month later at a widespread panic festival in colorado. we couldn’t find camping and set up tent in a taco bell, were woken up by the Denver sheriff who ran our licenses and let us stay. 2 months later he moved to charlotte where i just started working for a law firm uptown. we came up with ‘we be illin’ sacred heart children’s hospital‘  and urban outfitters ordered 5,000 of them, along with ‘get high on yourself,’ and we were off.


1 month later i quit my job and we moved to ventura california, driving nonstop for 2 days with holden on the passenger’s lap.


we sold mounds of dirty old t-shirts on ebay, and modeled every one of them. we started coming up with more and more ‘originals’ and working with factories to make supersoft t-shirts in flattering cuts. that was a shitty process, i didn’t really deal with it.


we got recognized by strangers at music festivals and on the streets. i didn’t like that. American eagle outfitters copied our ‘detroit is for lovers’ shirt and we sued them and settled. It was awesome.

we hired happymexicansock, aka socky, to stuff packages.


we met a bunch of awesome people across the street.


we hired matt duerr to manage the growing warehouse and do sales.


we made up the ‘voting is for old people’ shirt and caused quite a stir, Russell Simmons hated it, MTV hated it, the san diego news came to our house.  it was awesome.

we had an online dating contest for matt (get fresh with mateo), won by none other than kid D, and flew her out to san diego from oklahoma for a weekend. It was awesome.


we moved to hillcrest for a couple months, and then moved to encinitas, where we had a pool and a living room full of trampolines and a bitchin 80’s homecoming dance.

we had a contest and took 8 people to amsterdam for 4 days to film ‘vintage vantage and the disappearing corn dog.’  there was a lot of footage but no movie came out of that trip. yet. i peed myself on the street in amsterdam laughing so hard, at what i have no idea.


Matt quit for a more stable job, and John moved the warehouse and operations up to San Francisco.


I moved to Asheville.


Things quieted down, but we kept coming up with newer better funnier t-shirts, and selling the best real vintage from the 70s and 80s online. We started making t-shirts for bands – ALO, Tea Leaf Green, Guadalajara Joe…awesome shirts for awesome bands.


The inventory was hugely swollen and the sales were down. We are not good business people. The economy went to crap. We didn’t adjust. The interest on a loan from Bank of America ate all our profits. No good offers to buy the business materialized and now we have to liquidate.


I plan on selling vintage t-shirts on my own, on ebay and on etsy, possibly on the vintagevantage.com website if I can arrange that in the next few months. And I’ll keep making peanut butter stash safes.


John is starting a new t-shirt company with a well-established LA partner and their future looks bright.


Nacho will continue hopping through life like an arctic bunny.


Some of my favorite t-shirts over the years have been:


I see you baby (shakin that ass) – in Braille!

Made a shirt with my dad on it –

And one with holden on it –

it was a good ride. 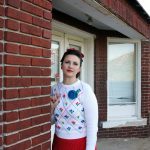