went down to tallahassee florida for a wonderful thanksgiving this weekend. it was 60-80 degrees and sunny 90% of the time. glorious!
we went to the florida-florida state football game saturday afternoon. we bought tickets outside from a referee (he was in his uniform) who said they were on the 50 yard line, but they were really on the goal line. the pregame was amazing. pomp and pageantry. chief osceola- a fake seminole on a palomino with a flaming spear. people were serious about the tailgating. the only jacket i had with me happened to be gator blue and i got some unwanted attention from that. friendly drunken gator fans tried to get me to cheer with them but i didn’t know the words. but now i do.
IT’S GREAT
TO BE
A FLORIDA GATOR!
it was cold in the shade and we left during the first quarter.
we ate at shell oyster bar downtown tallahassee. best raw oysters i’ve had maybe ever. they were so cold and salty and fresh. there are no windows in the restaurant but it’s AWESOME. my dad would love it.
nacho and eli were pretty good. nacho was scared of the two year old. she is very sweet and did nothing to antagonize him – he’s never been around toddlers and didn’t know what to do. so he jumped in place and barked. bad dog. eli pushed himself too hard chasing tennis balls and hurt his leg which had him hobbling badly one night, but it miraculously healed by the next morning. he’s taking it easy.  they spent time with rosie, the black lab who would have been a great bitch for holden. this picture captures their personalities pretty well. good times!
i hope everybody had warm safe bountiful weekends. 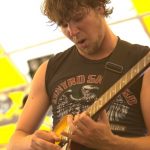