got in the car this morning at 730 AM, excited to get to 2 local thrift stores early when the first racks came out and the aisles would not be clogged with nit wits and their shopping carts.

the lights on the dashboard came on, but the engine didn’t start, and i could not shift the car into drive, reverse, neutral – nothing. the digital clock was flickering. then i could not turn the car off. this is a potential problem with a battery car. it’s a 2005 prius, basically a golf cart with windshield wipers. it was stuck “on” but unable to move in any direction. crazy.

i called the dealer and they thought it needed a new 12 volt battery, a google search confirmed that was probably the problem, and i called a tow truck to bring me and the car to the dealer.

when the tow truck arrived an hour later i asked the guy how he was doing and he said it was the best day of his life.

i thought he was being sarcastic. i said ‘oh really, why’s that?’

let me say that this was a good ol country boy, probably in his early 50’s, bald, scruffy gray beard, a little on the heavy side, cheeks full of chewing tobacco that he was spitting into a mountain dew bottle.

he said ‘i lost my daughter. about 10 years ago. her mama took her from me and i couldn’t see her anymore…(me: “oh, i’m sorry…”) on the way here i got a call from a girl in oklahoma city. my little girl called me and i got to talk to her for the first time since she was 5 years old. i prayed every single day for this to happen.’

turns out she found him through facebook, is about to graduate high school in may, and has a baby boy. she saved all the letters he had ever sent her. he is now saving money to go out there and see her graduate, saying ‘that’s a big’un…can’t miss that.”

he dropped me at the dealer, i got a new battery, and went on my merry way.

I get tons of comments and smiles every time I wear this What the Flock tee. Cheers Skippy! 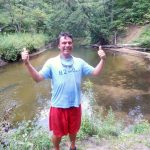