this weekend we took pouncey out to trails end in waynesville to play with his brothers and his mama.

there were 4 pups in his litter. all boys – 1 was white, 3 were brown. the white one was picked first. his name is harley and he lives in franklin, nc.

next we picked pouncey out of the remaining 3 brown ones.

then another family came and picked jake. sadly for jake their circumstances changed and jake didn’t get any attention and he was returned to trails end a couple of weeks ago. he is kind of like a feral animal. he has stubby legs and was trying to hump pouncey the whole time, but there’s a sweet dog underneath.

the last puppy was duke and he stayed at trails end with their mama, blizzard.

pouncey had a BALL!

pouncey was the best fetcher. the fastest. the most energetic.

also the goofiest. and tied for best manners.

cover dog, duke is the biggest by 10 lbs. he is very friendly and sweet, and he is definitely in charge. pouncey is the only one who is fixed. (jake is getting fixed soon to curb the humping.)

harley also sucks on his bed! just like pouncey. they were the first two taken from their mama, i think this is why. harley doesn’t really fetch, he runs in circles. much like nacho. his fur is soft as a bunny, too.

pouncey and duke have matching tongue spots on their XXL tongues. of all 4, they are the most similar. i don’t think they recognized each other, but maybe they sensed a familiarity, and i know they did have lots of fun! 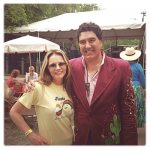