imagine yourself at a baseball game.
you are sharing a basket of fries with someone you love.
it comes down to the last fry.
it’s a big fry.
Categories: food, nature, poll, voting

what a strange word, i don’t think i have ever used it in real life far be it from me to skew the oh-so-pure democratic process, but if you have a minute and a mouse, please click this link, scroll down to the bottom and vote for Jennifer “JJ” Smith who would like to set a world record for the biggest blood drive.

you can vote once a day now until saturday april 9. you don’t have to register or give your email address or anything. simple. 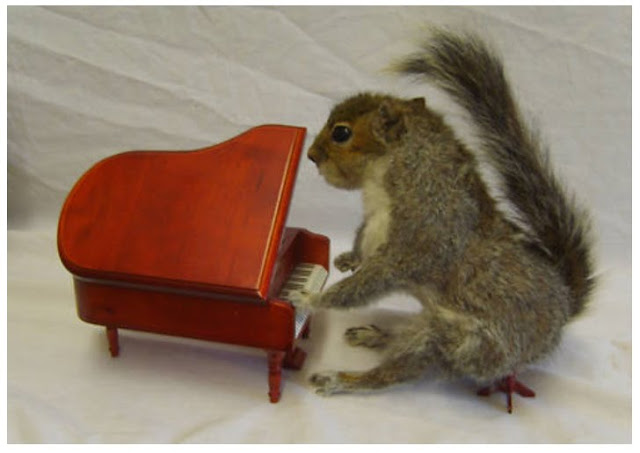 an eBay seller in the UK stuffs squirrels and poses them in adorable positions.


for instance, this “Wild Grey Squirrel With His Piano.”


if anyone is ever struggling with a gift idea for me, one of these would be a surefire hit. i have done a highly unscientific study involving everybody i can think of which supports the conclusion that the sex of a first child is likely to be the same as the sex of the dog those people own.

i would say 75-85% of people i can think of who own/owned a dog before having a child are blessed with a baby of that same gender. it is not 100% and there are exceptions to every rule, but it seems to be the great majority. it does not hold as true for second or third babies.

think of someone you know who had a boy baby.

did they have a boy dog?

is this true across the board or just with people that i know?

if it’s true – why? do the dogs emit hormones?

is it true for cats too?